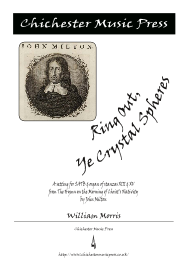 Ring Out, Ye Crystal Spheres was commissioned by Kingston Arts for the 2011 Kingston Festival of the Voice. The challenging brief was to combine the classical theme of the festival with the liturgical theme of Christ the King. John Milton was to provide the answer in his epic poem The Hymn to Christ's Nativity. The most overt Greek references in these stanzas are to the crystal spheres. As they moved round they sang a divine nine-fold harmony called 'the music of the spheres'. Beings on earth - corrupt creation - couldn't hear this heavenly music. The nine-fold chorus forms a central part of this work followed by 'Truth and Justice' descending to earth.

The premiere performance of this work was on 20th November 2011 by the Choir of Hampton Court Chapel, conducted by Carl Jackson.