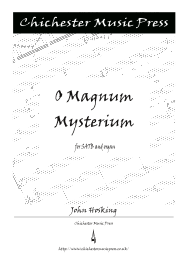 As soon as I was asked to write some music for the St Asaph Choral Society for Christmas, the text O Magnum Mysterium came to mind. The text immediately made me think of interesting colours that the organ could produce, with vocal lines "floating" in and out. The whole work would be a gradual build up to the final triumphant 'Alleluia'.

The piece opens with very mysterious and colourful sounds from the organ in the key of Eb minor, which hopefully illustrate the first line of the text "O Great mystery", aided by the Vox Humana stop  a curious sound intended to imitate the human voice. A dialogue between the soprano and alto voices of the choir leads to a terrific build up from the organ, which lands on a blazing F major chord at which point the voices sing 'and wonderful sacrament'.

Plainsong has always inspired my liturgical improvisations at the organ; unfortunately the use of plainsong has much declined in the UK, but there is such a wealth of material here that I was keen to use this within my composition. And so at the words "Dominum natum" (newborn Lord) we hear the "Hodie Christus natus est" plainsong treated in canon between the organist's right hand and the pedals. A few bars later, snippets of the "Ave maris stella" plainsong appear, introducing the words "Beato Virgo" (Blessed is the Virgin).

The final alleluias are intended to start as a quiet, humble expression of joy depicting the lowliness of the birth in the stable. The beginning motif starts to build and build with all parts rising in pitch, gaining in volume until the organ takes over with a short fanfare-like passage. This leads to the key of D major (a complete contrast to the opening), at which point the choir joins the full organ in singing big, triumphant alleluias  almost as if the effect of the lowly birth in the stable has finally been realised.