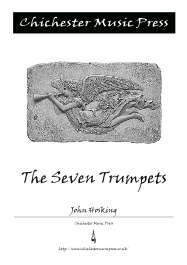 The Seven Trumpets was conceived as a dramatic presentation of the prophesy found in the book of Revelation. Throughout the work, I have tried to paint the text as far as possible: when a star falls from heaven, the piano plays fast demisemiquavers starting at the top of the keyboard and finishing up almost at the bottom; the locusts are symbolised by quick glissandi on the cello and a buzzing vocal effect; muted trumpets depict a smitten sun.

The solo soprano takes her first big role declaiming "woe to the inhabitants of the earth", rising up to a fortissimmo top Bb, after which the flute very briefly simulates a star falling to earth. The bottomless pit is firstly depicted by the organ playing semi-quavers very low down on 16' and 8' stops to produce a rumbling effect. Following this, a massive crescendo builds up with the timpani taking over from the organ and the extent of the pit being seen for perhaps the first time.

After all the drama has temporarily subsided, perhaps one of my favourite parts in the work is an unaccompanied section for double choir. The words "That they should not hurt the grass of the earth" are sung in dialogue between the two groups and provide a moment of reflection before the drama begins again.

Perhaps the most dramatic part of the work is the interlude for percussion and organ symbolising the thunder uttering its voice. The timpani starts with fast semiquaver triplets, soon joined by the organ with a toccata-like figuration in the key of G minor.

Finally, the seventh angel is greeted by the biggest fanfare of all. In dialogue with the brass and organ, this is very noble in character and sets the harmonic mood for the remainder of the piece. After the turmoil and very chromatic harmonies presented earlier on, much of what follows is now very concordant to illustrate the joyfulness of the text "The kingdoms of this world are become the kingdoms of our Lord....and he shall reign for ever".

Please listen to the live recording instead of the Scorch playback, which has been muted. You can still view the score in Scorch.