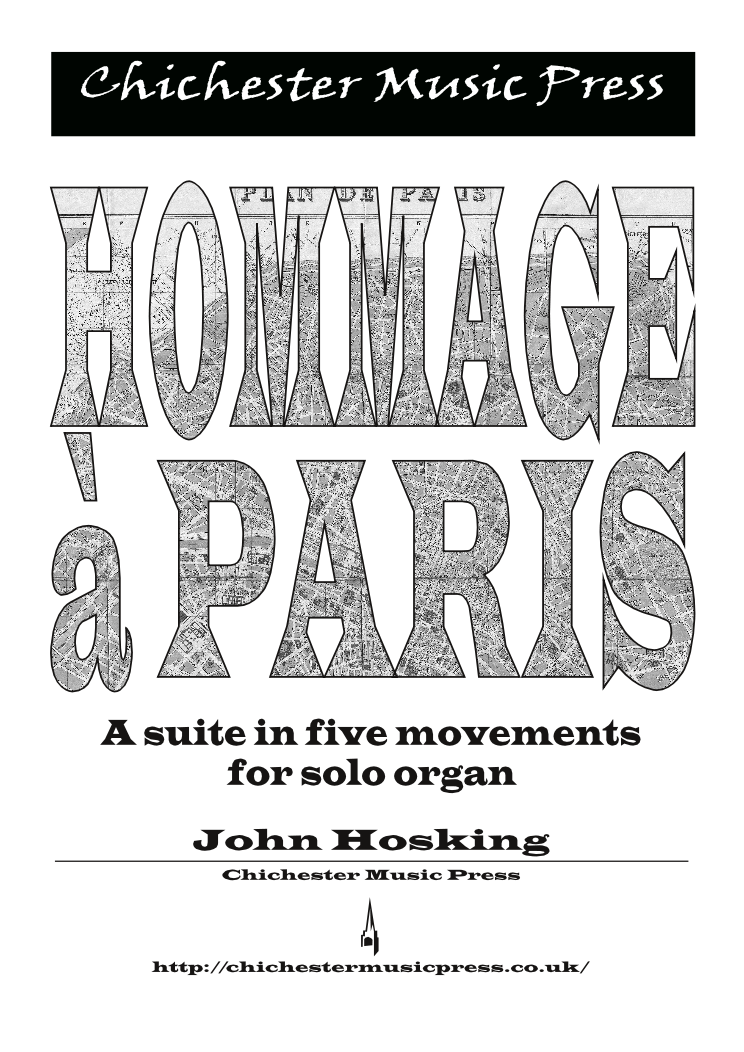 Hommage à Paris was commissioned by Martin Baker, Master of Music at Westminster Cathedral. Martin is renowned for his superb technique, colourful use of the organ and improvisations in many different styles, so this suite is written to take full advantage of his ability.

The whole work is based upon the two-bar theme heard at the outset in unison on the tutti. The Prelude contains some styles and figurations typical of Vierne, with an adapted quote from Saint-Saens' Organ Symphony. Theme B, which enters at bar 64, is an inversion of the original theme.

The Fugue is, in part, a homage to Dupré, containing syncopated rhythms with thin textures, reminiscent of his Fugue in B major. The fugue subject is based exactly on theme A and builds up to an exciting conclusion, typical of many French fugues. The triplet figurations on the Chamades recall the extrovert style of Pierre Cochereau in many of his improvisations. So far, this links Vierne via his assistant, Dupré, to his successor, Cochereau, as Organist of Notre-Dame Cathedral.

The Scherzo pays homage to the later style of Vierne and the improvisations of Cochereau. The right hand plays a tripletised version of theme A, while the left hand moves up and down chromatically giving an unsettled yet cheeky harmonisation. The initial pedal entry played on the Vox Humana and 2' Flute catches the listener out as is not based on anything we have heard to date. However, its second entry disguises theme B carefully.

The Adagio makes use of theme B in the minor key, calling to mind at first the slow movements of Widor's symphonies. Section B builds up to an exciting tutti before an almost exact recapitulation of section A.

The Final is a fusion of many different styles and is based on the retrograde inversion of theme A. Theme A makes subtle appearances before the end and at bar 82, theme B is combined with the second theme of the Final, with B major pedal scales (apologies to Vierne). The final few bars switch rapidly between figurations that Cochereau, Dupré or Vierne could have used, providing a grand conclusion to the suite.

Please note the Scorch playback has been muted. Use the MP3 here.