They shall grow not old - David Fawcett 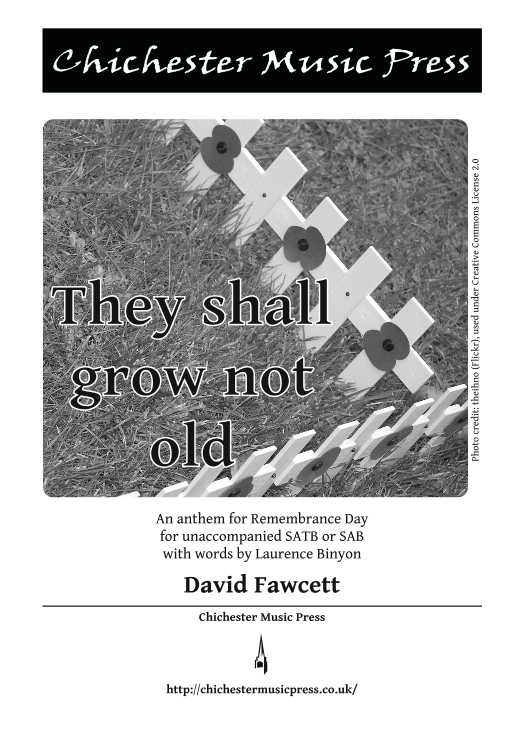 This work is now available for SAB or SATB. Both versions are contained in this edition.

Of the SAB version, the composer writes:

When I took over as Director of Music at St Mary's, Balham, I inherited a church choir typical of many nowadays - keen and committed, but small and lacking the voices to tackle much of the standard four-part repertoire in its large library from another era, and overwhelmed by too much counterpoint. It needed a steady supply of easy-to-learn, quiet, reflective motets for different seasons, for use in the now customary "choir slot", during the administration of Holy Communion. I found an ample supply of recently-published accompanied anthems for small choir, but little in the way of simple SAB a cappella motets. I therefore started writing my own, in a largely homophonic texture.

In this case, I was keen to avoid romanticising these famous and moving words, so employed a quasi-modal melodic and harmonic approach reminiscent of some early 20th-century works of composers like Charles Wood and Martin Shaw. In the first half, the two-part texture provides a sparse, almost forlorn, treatment of the words, while giving the altos a more prominent role than they often have. After this stark, thought-provoking opening, the addition of a single line for men under the repetition of the melody, and just a hint of chromaticism on "sun", seems to add far more richness than would otherwise be heard in three-part texture.

In this new edition with the addition of an optional tenor part, this popular and evocative anthem can be used by choirs large or small.