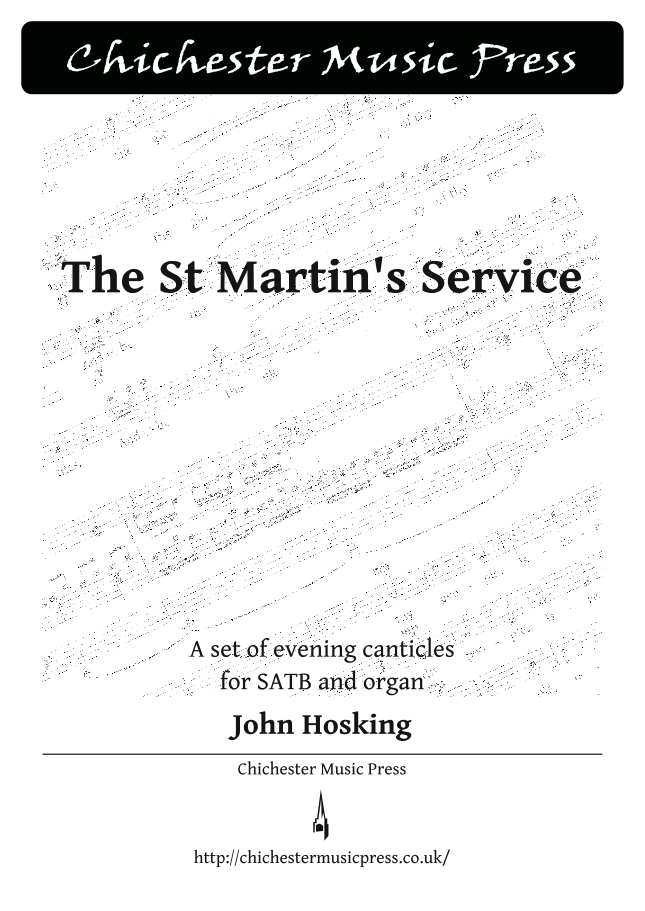 I was absolutely thrilled to be asked to write a work for the St Martin-in-the-Fields choir and organ. My time at St Martin's acted as a substantial turning point in my career; it was here that I first learned to accompany choirs successfully and learned a great deal of new organ repertoire, inspired by the magnificent instrument whose restoration is the focus of the concert for which these canticles were commissioned.

St Martin's is probably the most dynamic, varied church to be found within the UK; I remember playing for traditional Anglican-styled choral services, the quite spectacular display of the Pearly Kings and Queens harvest service, a memorial service for a crew member of The Bill, and other services with guest preachers such as Terry Waite and Desmond Tutu, visiting musicians from Bongo drummers to the singer/songwriter Michael Masser and many royal visits. I was very keen to reflect as much of this as possible within the music, which would ensure something lively, dynamic and uplifting.

A composition celebrating the restoration of the organ needed to make more of a feature of the instrument than simply a tool for accompaniment, and so the extended introduction with irregular time signatures shows the organ off in all its glory. Much of the vocal writing has been constructed so as to bring the text alive as effectively as possible, whilst also giving chance to show many different (and sometimes unusual) colours off on the organ. After the text "and holy is his name", the pedal Chalumeau stop — one of my favourites — has a short solo. The swell reeds provide an exciting but fiery introduction to the words "he hath shewed strength with his arm"; the hungry are fed with good things following a cheeky interjection from the Swell 8' flute and "the rich" are depicted with the very colourful Voix Humaine, before being "sent empty away" to bare 5ths from the choir.

The St Martin's organ contains heavy influences of French voicing and so the introduction to the Gloria of the Magnificat is very much in the French style — partly influenced by some of the improvisations of Pierre Cochereau. However, St Martin's has always been all-embracing of many different styles of music and after the choir's initial entry, "Glory", a two octave blues scale is played before the very dance-like remainder of the work continues. This fusion of styles really brought to mind my experience of working at the church; one really never knew what would be encountered next and it was important to be ready for anything. The movement finishes with a brief reference back to the introduction, with a final jazz-like flourish to end.

The Nunc Dimittis begins with a dialogue between two flute stops on the organ, accompanied by gentle strings. The tension between the two flute parts builds, depicting the intensity felt by Simeon as he waited so long to finally see Jesus.

The harmonic tension and registrations on the organ gradually build throughout the movement, releasing a gradual sense of joy and wonder, reaching a terrific climax at "and to be the glory of thy people Israel". The organ then quickly subsides in volume before a reflective unaccompanied Gloria is sung by the choir.