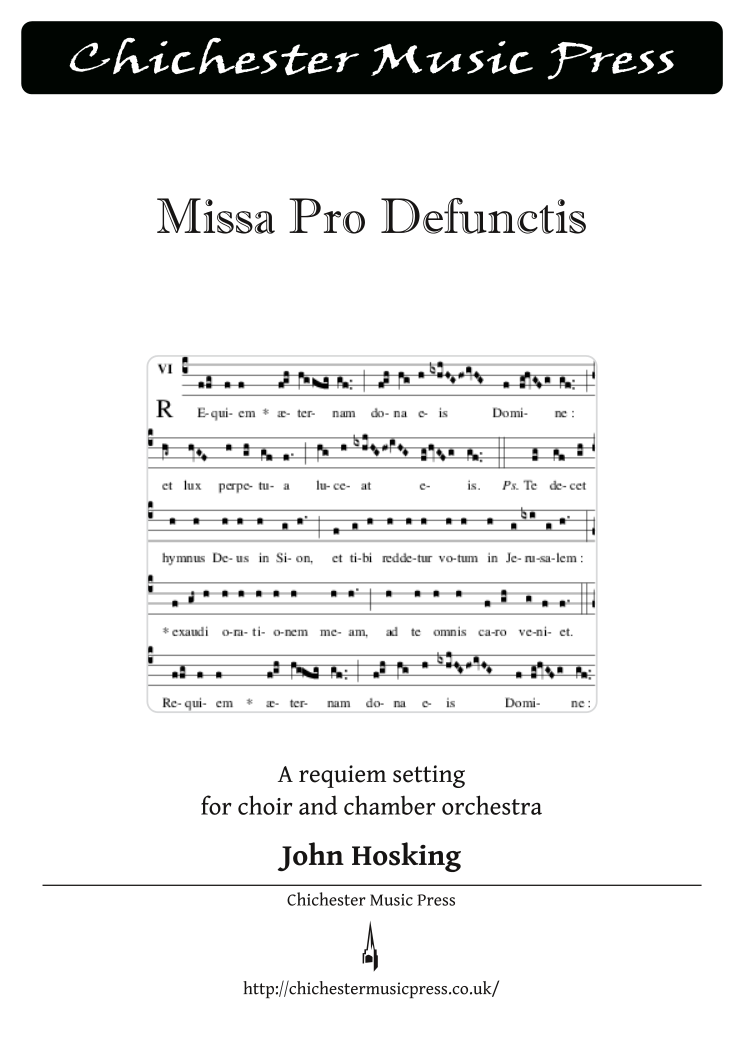 Missa pro defunctis was, in many ways, a natural follow-on from my first requiem. The first requiem had been written to be usable within the liturgy, keeping movements short, and performable as a whole with orchestra or organ.

I felt that I wanted to create a more substantial work the second time around, incorporating plainsong (which influences a lot of my improvisations at the organ) and setting the whole of the Dies Irae text.

The opening movement is based upon the Requiem aeternam plainsong, leading into a Kyrie which began life as part of another commission. Originally written with organ accompaniment, the orchestration of the Kyrie proved to be one of the most challenging bits of writing in the entire work.

The Dies Irae begins with very conventional harmonies, almost lulling the listener into the false sense of security that it could be a late romantic work. As the movement progresses, the harmonies and orchestral effects become more and more outrageous, painting quite a picture of terror in places. The organ is used for dramatic effect at Rex tremendae, underpinning brass fanfares and rapid passage-work in the strings. This is probably the first of my works in which the organ plays a very subservient, albeit vital, role. The movement is rounded off with a substantial setting of the Pie Jesu; it was my intention that this could be performed as a separate anthem with organ accompaniment if so wished.

The Sanctus and Benedictus are very brief, but joyful, providing a stark contrast to the very chromatic Agnus Dei which follows. The Agnus Dei was conceived as a real plea of mercy and is based upon a theme beginning with a dropping 7th throughout. The final choral movement is the In Paradisum which is where the whole work began. This had been intended to be used in my first requiem, but hadn't quite sat right with me initially and remained half-finished. It was playing the first part of this one evening and having the inspiration to finish the movement off that triggered the writing of this second requiem.

Several people have asked the question "Why write two requiems?" The simple answer is inspiration; if I'm drawn to something and have the urge to write, I generally don't stop until it's finished over a very intense few days. I love the text of the mass; the extra parts of the requiem text add an extra bonus through being extremely vivid and conjuring up lots of images in my mind. I thrive on being able to illustrate a text through the medium of music and hope that it brings an extra dimension of understanding to the listener.

The solo soprano role throughout the work was conceived from two perspectives; one to add dramatic flair and the other to be very reflective. To this end, the ideal is for a soprano with a very pure tone to sing the Pie Jesu and Benedictus solos, and someone with a more Verdi-like sound to sing the rest.

The Missa pro defunctis finishes with a purely orchestral movement. Were this mass to be used liturgically, there is always need for recessional music at the end of the service. With this in mind, I orchestrated the Adagio from my organ suite Hommage à Paris, which provides a contemplative, but quite dramatic, conclusion to the whole.