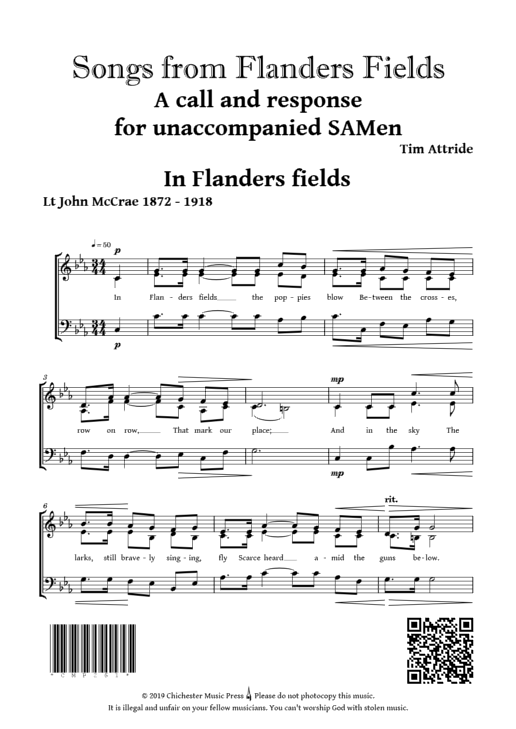 Using the words of two poems written during WW1 - one very well known, the other deserving to be - these two short anthems are most suitable for Remembrance Sunday or Armistice Day services, either individually or, as the product subtitle suggests, as a calling (by the soldiers who perished) and response (by us to their sacrifices).

Lt Col. John McCrae wrote his words whilst serving as a military doctor in the Canadian Field Artillery at Ypres, probably in May 1915 in response to the death of his fellow soldier and friend Lt Alexis Helmer. It was published posthumously in 1918, McCrae having died of pneumonia in January that year.

Moina Michael, an American with family roots going back to the Huguenots in Flanders, was a humanitarian and poet who was so inspired by McCrae's words that she both wrote this response and started the tradition of selling poppies to support injured war veterans. Indeed, she vowed to wear a poppy herself every day of her life.

The anthems have been written specifically to support the poetry, which is why there are bars of so many varying lengths. Despite (or, more probably, because of) this, there is a rhythm which will soon feel very natural when they are sung. They could fit well before and after either a period of silence or reflection, or a time of appropriate prayer.